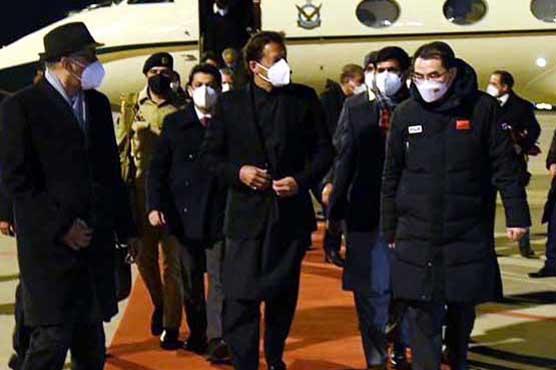 The Prime Minister arrived in China on a four-day visit

Prime Minister Imran Khan has arrived in Beijing on a four-day visit. The statement said that he was received at Beijing Airport by Chinese Assistant Foreign Minister Wujiang Hao.

Earlier talking about the visit, Federal Minister for Information Fawad Chaudhry said that 21 different sectors have been identified on which the Prime Minister will discuss with the Chinese leadership. Areas under discussion during the Prime Minister’s visit to China include Special Economic Zones to be set up under C-Pac, trade, information technology, agriculture and relocation of large scale Chinese industries to Pakistan.

The Foreign Ministry said in a statement that the Prime Minister will hold bilateral meetings with Chinese President Xi Jinping and Chinese Premier Li Keqiang. In the meetings, the two leaders will take stock of bilateral relations, with a special focus on trade and economic cooperation, including C-Pac. The Prime Minister is visiting China at the invitation of the Chinese leadership. It may be recalled that Prime Minister Imran Khan has repeatedly said that the government has shifted the focus of C-Pack from road infrastructure to industries, energy and agriculture.

Special Assistant to the Prime Minister for C-Pack Khalid Mansoor said that at present he is fully prepared and has done a good comparative analysis of the possible facilities being provided to Chinese investors in this regard. The two countries had discussed 10 different areas for a joint working group meeting, but meetings have been arranged with influential Chinese industrialists who will meet the Prime Minister during his visit

Benazir Bhutto was the first woman Prime Minister of the Islamic world, a courageous voice of democracy: Shahbaz Sharif