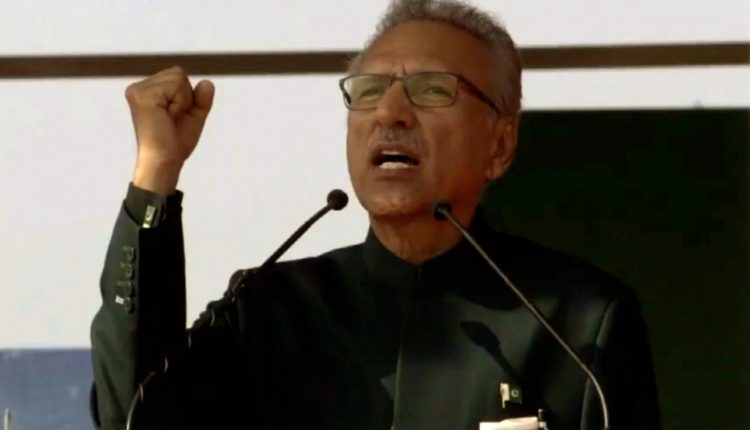 The enemy will open his ears and listen, he will give a blunt answer to the adventure: President

Addressing the main function of Pakistan Day, President Dr. Arif Alvi said, "Any adventure will be answered promptly and decisively, as we have been responding."

President of Pakistan Dr. Arif Alvi has said that Pakistan will never compromise on its security and sovereignty and any adventure will be met with immediate and decisive response.

Addressing the main function of Pakistan Day in Islamabad on Wednesday, the President said: “We will always cherish the freedom and sovereignty of our dear compatriots.”

Addressing the ceremony, President Arif Ali, without naming any country, said: “We are a responsible nuclear power and we want peace from all countries. However, I want to make it clear and let the enemy hear that We will never compromise on security and sovereignty and any adventure will be answered promptly and decisively, as we have been responding. ”

At the same time, he criticized neighboring India, saying: “The instability in South Asia is due to the expansionist ambitions of our neighbor and its illegal occupation of Kashmir.”

He demanded the United Nations to take notice of these violations in Kashmir and implement international resolutions. According to the President: “We are waiting.”

In his address, President Arif Ali also mentioned the two-day OIC conference in Islamabad and said: “Pakistan is a founding member of the OIC and we want to make it more effective.”

‘Pakistani forces are fully prepared in case of Indian aggression’
President Arif Alawi further said that in order to find a solution to these problems, this is the best opportunity for the Islamic world to spread its leadership and work for the unity of the Muslim Ummah. “We believe that mutual unity can meet all these challenges.”

The President also mentioned the challenges like fake news and said: ‘I speak to parents and teachers from all sections of the nation, especially the Ulema-i-Ikram, with whom we fought against Code 19, and on the media. It is my responsibility to play my part in tackling these issues. ”

He added: “The people of Pakistan want the rule of law and believe in it. We must remember the decree of Quaid-e-Azam and make work, work and work our goal for the national interest.”

Foreign Ministers of OIC member countries were the special guests at the Pakistan Day celebrations.

How to propose to an editor to collaborate on his blog by writing an article as a guest?