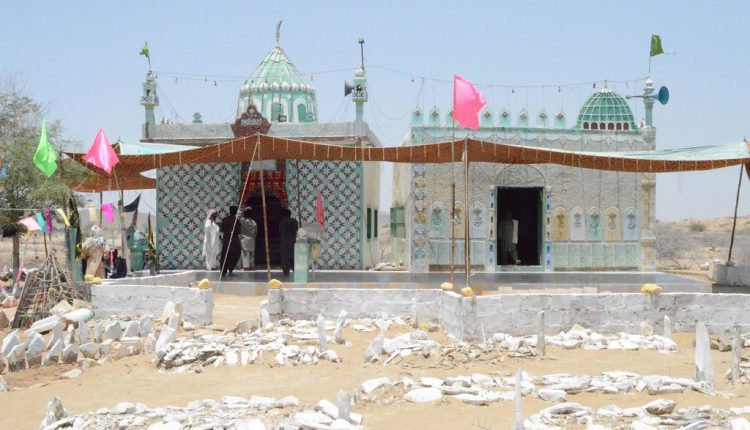 Sassi Punnu Shrine Lasbela Balochistan. From Karachi, the Shrine of Sassi Punnu is located 65 kilometers and it takes 2 hours to reach here If you are traveling the first time, you can take help from Google Map So safe side, put water and fruit in y…
Read more in English

Sassi Punnu Shrine Lasbela Balochistan. From Karachi, the Shrine of Sassi Punnu is located 65 kilometers and it takes 2 hours to reach here If you are traveling the first time, you can take help from Google Map So safe side, put water and fruit in your vehicle On the way to the Hub Chowki, you enter Balochistan from Karachi. and from Mundra Square(Chowkh)you turn on the right side on Sakaran Road Sakran is the agricultural area of Lasbela District Traveling from dates(palm)and Chiko(sapodilla)trees make this short journey more sensible this whole area is irrigated from Hub Dam. covering 32 kilometers on Duraji(M8)road you see the signboard of Sassi Punno Shrine on your left side from here a 20 km a kach(off-road)road takes you to the shrine…..music….If you are a tea lover, then on the Dhada hotel located on the road corner then you find a fresh goat or cow milk tea here, we are met with the hotel owner Mohammad Bukhsh Tea is available, cow milk.No milk in the goat’s, I have 80 – 90 goats.

No milk in the goats. dry they belong from Zehri and they brake the Khan Khalat Jail and run away Our tea is ready
with hot tea, we learn to show things new about the tribe of that area that run from jail that why they know as Bandija
mama, please take care of them after finishing our tea we continue of journey
Shortly after a mountain series started to offer a very beautiful scene.
This route was a major highway in Sindh and Baluchistan.

People and caravan used to go to Sindh and Balochistan in that same wayIts marks are still in the form of graves
present on both sides of the road. you see the base foundation made from stone Sassi Punnu Shrine Lasbela Balochistan
it seems that some designs were made on it It looks that the edges were designed or cut with something and its top or below you see the foundation of the grave on the foundation it’s first layer, second and third layer.

It’s on four layers on the opposite side of the road there is another grave Later, we know that the grave belongs to a Syed the structure of the grave is the same but, there are no steps on it.
and big in its size. After crossing the big mountain, we see the shrine from a distance. Sassi was the daughter of Raja of Bhambore(present Sindh)On her birth, the astrologers told Raja that this girl will be a bad sign for the royal family.Raja(king)put the girl into a wooden box and poured it into the Sindh river. The box was found by a childless launderer at Bhambore. he considered the girl as a gift of God and brought up her like his child Punnu was the son of

Kach’s (Turbat, Balochistan) Mir Aali Hoth was younger among all the brothers. when Sassi become young, then
the stories of her beauty spread far away when Punnu heard about Sassi, he became excited to meet with her.
For it, the young prince traveled to Bhambore.

For washing his clothes he reached Sassi’s house to her father when he put the first glance on the Sassi he lost his heart in the steps of this beautiful Queen. Sassi also lost her heart in his love. Punnu’s father and brother were against this marriage. his brothers tried to forbid him and threaten him but Punnu did not agree in any way so, they adopted another method Apparently, they agreed on their marriage.

And also participate in Punno’s wedding ceremony where they give Punno sleep-inducing drugs from which he was unaware of himself They fasten him and put him in a camel, and they brought him to their native area(Kach)next morning, Sassi realized that she was cheated. In the condition of grief and anger in naked steps, she decided to walk on the way Kach Makran On her journey, she traveled through difficult deserts but she continued her journey. In all the journeys, she kept crying Puno Puno In the condition of extreme thirst she found a shepherd who gave her water to drink shepherd’s intention was bad when he sees its beauty.

Sassi ran away from there and prayed to Allah to hide her God heard her pray, the ground burst and she got in it. On the next day, when Punnu comes in his sense, he also calls Sassi Sassi and runs to the side of Bhambore On the way, he met with the same shepherd who told him all the details. Puno also prayed to their Lord and the ground was once again burst and Puno enter it. this is the entrance on both sides there are different colors of flags and tracks is going from them. toward the shrine side on both sides, you see the stones put and the track is made between them.

The width of the track is 6 – 7 feet’s and this is going straight toward shrine side color, you see looks beautiful colors of cloths in yellow color purple color, green color and you see the tree in the center and room a construct on that side on side of the room there are tree and side of the tree there is a gate going to the inner side of shrine some instruction was written here, Is requesting all the faithful that it is strictly prohibited to using any drugs in the premises of the shrine. you can see it’s the entrance.

We show you the view of the hotel in its surroundings you can see that the shrine is located on the left side on the right side it’s Masjid on the right side it’s the surrounding of shrine courtyard is metallic and tiles are on the floor you can see it’s surrounding, different rooms were made on it On our left side, graveyard you can see some graves On its the opposite side, the grill is placed on it surrounding one door is placed on it for going outside there is graveyard For me coming to here, Sassi Punnu Shrine Lasbela Balochistan was according to reference the ground was burst the Sassi and Puno were got in it was special for me.

I can’t explain it in words the inner side of the shrine was beautiful Even today, the lovers come to attend the shrine to pray for the love to remain forever you can see the grave of the shepherd grave is there who in this whole story of Sassi Punno Sassi has stopped by the shepherd here who attack him lot’s of people from Singh no one from Sassi Punnu Shrine Lasbela Balochistan or Bela the footstep of Sassi is with us here now you can see a stone and sign the sign of foot on it now we ask the Abdul Rehman that what is the historical background of it and whom it belong. whom footstep is Sir, these belong to Sassi you can found other sign on top of the mountains these areas, knees