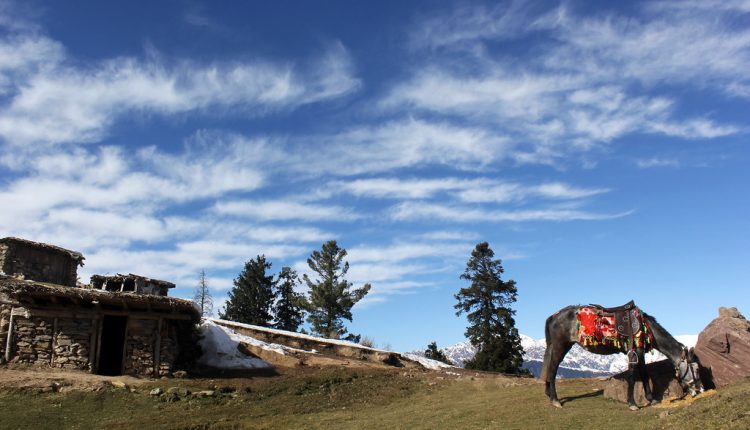 Paye Meadows Siri Paye is two peaks that are situated above Shogran city. A heavily guarded meadowland with a lush green surface and towering pines cover the entire surface of both peaks. The trek to Siri Paye is a rocky one with very narrow, steep …
Read more in English

Paye Meadows Siri Paye is two peaks that are situated above Shogran city. A heavily guarded meadowland with a lush green surface and towering pines cover the entire surface of both peaks. The trek to Siri Paye is a rocky one with a very narrow, steep, and bumpy track, it will be one hell of a ride. The hardest climb will take one to the breathtaking views of Kaghan valley and surrounding peaks overlooking the city of Shogran. A crystal freshwater lake is situated right in the center of the Siri meadow. Animals grazing the field, wild yellow and lilac flowers adorn the meadow.

Paye Meadows is one of the most beautiful and picturesque places in Northern Pakistan where nature can be found blushing everywhere. In the spring season, the flowers bloom and these colorful creatures look awe-inspiring with the white backdrop of the Makra Peak. This place is simply the best for a weekend adventure or even a full-fledge tour away from your stressful routine. This small hamlet provides the excursion which simply makes your day full of joy and excitement. Visiting the place in the summer months allows one to experience the fresh and cool weather amidst the friendly local people. The splendor and the charm of this place will remain embedded in your memory for a long. You will simply find yourself in another world as soon as you will get into this enchanting and vibrant hideout that features bountiful thrills and fabulous treks to the visitors. There is a lot to explore about this beautiful haven of Pakistan and words won’t be enough to express the real beauty of this marvel of nature.

Siri Paye meadows are located 6 km away from Shogran, 10 km away from Kiwai, and almost 34 km away from Balakot. Getting it is easy through a 212 km metalled road from the capital city of Islamabad. Once you are in Shogran, a jeep ride, hike, or horse ride can take you to the beautiful meadow located at an elevation of 3000 meters or 10,000 feet. The meadow also has a famous lake called the Payee Lake which is located in the center of a valley created by the peaks of Makra, the mighty and majestic Malika Parbat, and the Moosa ka Musalla Peak. The lake itself is located at an elevation of 9500 feet equating to roughly 2895 meters, but the mountain peaks surrounding the lakes are much, much higher.

The Siri Paye meadows and the surrounding mountains will come under snow cover during the winter months. Therefore, the summer months are the best time to visit the place. However, there are two times to visit them in summer depending on the choice of the trip.

So depending on what the members want to see, the trip can be arranged accordingly. However, during the end of the summer, much of the vegetation will grow rough and there will be the harsh sun. So it is not recommended to travel to these lakes during the last part of summer.

The flora and fauna of the Siri Paye meadows are very diverse and there are various phases throughout the year when many migrating animals and birds also appear there.

The main mammals that are found in the location of the meadows are the marmots, other small rodents, and various verities of wild sheep, although, many of the wild sheep have since been domesticated. There have been various sightings of leopards but these have not been recurring and it is thought that human expansion has driven away from the leopards from the area.

The birds in the area are the various birds of prey such as hawks, ospreys, eagles, and vultures. Small birds such as snow pigeons and blue jays wood cocks are also seen. There are also various verities of migrating birds that come to the nest during the summer months.

The flora of the area is made up of the many hardwood trees such as the deciduous and conifer species that make up the vast forests of the area. Also, there are the herbs and bushes which have been used as remedies by the local population during the past centuries. The local wildflowers and shrubs of berries are also present in this area, but all trekkers must take care not to consume any of these plants without making sure what they actually are as some plants may be slightly poisonous to eat. So, proper care should be taken while on the trip as it will help in avoiding any problems.