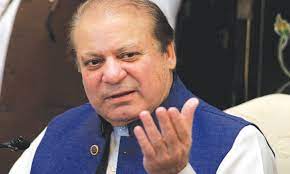 Pakistan Muslim League-Nawaz (PML-N) leader and former Prime Minister Nawaz Sharif, who is in the UK for treatment, is on a tour of factories instead of hospitals.
According to state TV, former Prime Minister Nawaz Sharif visited the factory in Nelson near Manchester with his sons.
Accompanied by Nawaz Sharif, former Finance Minister Ishaq Dar also went to Nelson from London to inspect the factory where he was also given a briefing.
It should be noted that the factory visited by Nawaz Sharif is located in Nelson area, 425 km away from London.
Attorney General’s letter is an attempt to influence the case under hearing: Shahbaz Sharif
Earlier, PML-N President Shahbaz Sharif responded to a letter written by the Attorney General regarding Nawaz Sharif’s return.
In the affidavit on Nawaz Sharif’s case, Shahbaz Sharif in his reply letter said that it seems that the Attorney General wrote the letter on the direction of the federal cabinet, this is an attempt to influence the media trial and trial of the Sharif family. I reserve the right to sue in any way. The statement did not violate a single oath. The contents of the High Court decision on the matter were not considered. Unable to understand why the Attorney General did not see the last paragraph of my affidavit.
He further said in the letter, “I am sure that this letter was written ignoring the political motives and relevant laws, ignoring the process, procedure and recommendations of the Medical Board. The matter is pending in the Lahore High Court. The Attorney General’s letter falls into the category of contempt of court.
Doctors stop Nawaz Sharif from traveling: Medical report submitted to HC
Former Prime Minister Nawaz Sharif’s medical report was submitted to the Lahore High Court yesterday. In which it was said that the doctors stopped Nawaz Sharif from traveling.
Former Prime Minister Nawaz Sharif’s lawyer Amjad Pervez submitted the report in the Lahore High Court. Nawaz Sharif’s medical report consists of 3 pages. The report said that Nawaz Sharif should not leave London without angiography, Nawaz Sharif’s health may deteriorate further due to mental depression, Nawaz Sharif is under severe depression after the death of Kulsoom Nawaz.
The medical report further said that Nawaz Sharif is a heart patient, Nawaz Sharif may have respiratory problems due to corona, Nawaz Sharif should continue his medication till angiography, former prime minister should continue activities without mental stress, Nawaz Sharif heart Coronary artery disease can be fatal. Dr. Fayyaz said that if there is any question, I should be contacted.
False report of Nawaz Sharif, I hope the court will take strict notice:
Fawad Chaudhry Federal Minister for Information Fawad Chaudhry has said that submission of false report of Nawaz Sharif will not solve the problem. I hope the court will take stern notice of these fake reports.
Reacting to the medical report of former Prime Minister Mian Muhammad Nawaz Sharif, Veer Information said that the easiest way for the PML-N leader to return the money of the nation and stay in London, his problem will not be solved by a false report. He said that the purpose of such report was to make fun of Pakistan’s legal system. According to the report, Nawaz Sharif should not go anywhere except Hyde Park. They must do the work legally. The Sharif family should return the money of the nation instead of packing fake reports. Dr. Shall lives in America. Dr. Shall said that Nawaz Sharif’s condition is not such that he can travel. I hope the court will take stern notice of these fake reports. And the country’s dignity will be restored.
This report is not a film letter: Shahbaz Gul
On the other hand, Dr. Shahbaz Gul, Special Assistant to PM Imran Khan, said that this is not a report, it is a film letter. Ayaz Sadiq was saying such things to please his heart. Nawaz Sharif did not come to Pakistan. The fugitive does not come back in broad daylight, his livelihood is in lying. We had asked for a guarantee of Rs 7 billion from the former Prime Minister. If Rs 7 billion had been taken from him, Nawaz Sharif would not have gone to London immediately.
He said that PML-N president Shahbaz Sharif had given a guarantee that action should be taken against him. This is not a report. Even Dr. Adnan used to write such love letters. Imran Khan will link Nawaz Sharif’s political heart. They are also lying for the extension of visas, they are trying their best to bring them back legally, the UK has also come to know that Nawaz Sharif is not lying ill.