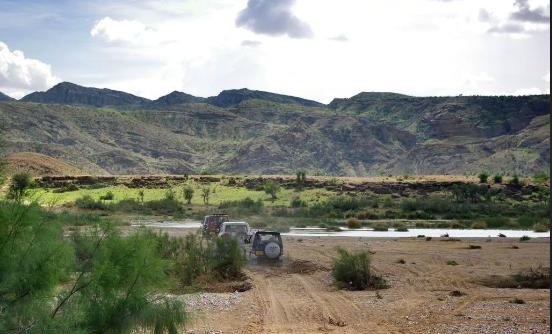 There are two tourist centers in the Park managed by Sind Wildlife Management Board, namely Khar and Karchat. The centres offer cottage and dormitory accommodation and guides are available. There are some 671km of unmetalled roads within the park, most of which are negotiable only by four-wheel-drive vehicles.

In 1977, 1,480 wild goats and 430 urials were counted in the park and 2,141 chinkaras in the park and adjacent Surjan, Sumbak, Eri and Hothiano Game Reserve. There are now over 5,000 wild goats, about 1,250 urials and less than 150 chinkaras in the park, and a further 400 wild goat and 70 urials in the game reserve. A helicopter survey conducted in November 2000 yielded estimates of the total populations of the three large indigenous ungulates in the park. The Sindh ibex population was estimated at 13,155 ± 2460, and concentrated on the Khirthar Range Kirthar National Park, with lower concentrations on Khambu and Dumbar and small numbers elsewhere; higher elevations appear critical to this species.

The Sindh urial population was estimated at 10,425 ± 675 and concentrated on rocky sites with characteristic vegetation mainly near Khar and at Dumbar, with small numbers elsewhere. The chinkara population was estimated at 1060 ± 580 and concentrated in the lowlands, sharing much of its habitat with farming. The KNP populations of all three species are of conservation importance. In October 1984, 15 blackbucks from the USA were brought to Khar visitor centre for captive propagation. It is planned to introduce the species to the park.

The History Of Pakistan