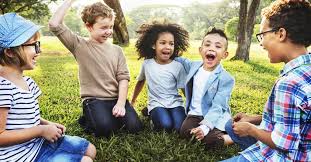 Humor in children is an expression of their intelligence, research

Children’s sense of humor reflects their high IQ and intelligence. Is.
A study was conducted in Turkey, the details of which were published in the research journal Humor. According to the report, only the clown children in the classroom are actually more intelligent than the adults and thus there is a deep connection between intelligence and sense of humor in children.
In human history, sense of humor has been termed as high intelligence because the expression of eloquent sentences indicates intelligence and present mind. Similar research has been done in adults before, but for the first time, its effects on children have been discovered.
In this regard, each of the 200 children was given ten cards in which cartoons were drawn. All children were asked to write a funny sentence or title while looking at it. After that, seven different experts categorized these sentences and gave first, second, third and other ranks to the written subject.
After that, standard IQ tests of all the children were also taken. When the intelligence and sense of humor in the children was examined, it was found that the children who had high sense of humor also had high level of intelligence. A clear link between intelligence and sense of humor was found in 68% of the children. Humor was especially prevalent among children who were well versed in general knowledge and verbal reasoning.
However, Turkish experts believe that the definition of humor varies from society to society. Jokes from one region may not be for people in another. This is because the sense of humor has to do with society, customs and values. That is why such studies have been done in western countries but now this research has been done in Turkey which is the confluence of east and west.
Uyghur Psyche, a professor at Anatolia University, is its main supervisor, who says that children try to intimidate adults with a sense of humor, but it is now known that it also has a deep connection with intelligence.

Discovery of 14 new genes that cause obesity