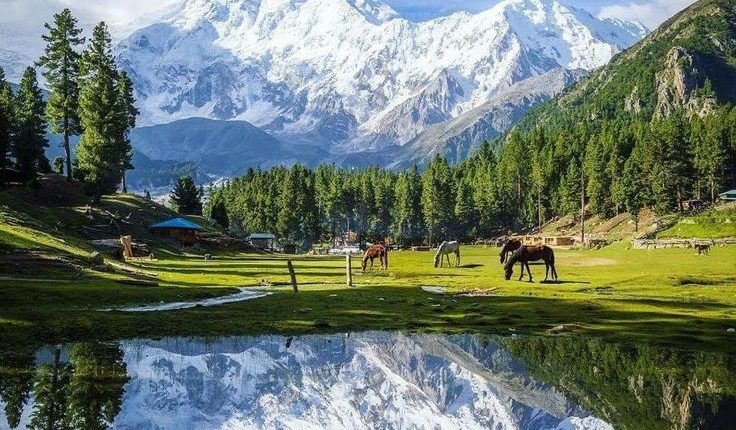 Fairy Meadow Nanga Parbat Western edge Himalayan Range Pakistan Get ready. For an epic ride towards Fairy Meadows along with one of the most dangerous roads in the entire world. No guardrails, no pavement, just dirt gravel, and amazing views. Good for…
Read more in English۔

Fairy Meadow Nanga Parbat Western edge Himalayan Range Pakistan Get ready. For an epic ride towards Fairy Meadows along with one of the most dangerous roads in the entire world. No guardrails, no pavement, just dirt gravel, and amazing views. Good morning from Chilas in Pakistan. It is day four and we have made it to our destination finally, after that- after that good old landslide or two or actually three, we finally made it late last night at around midnight way too tired last night to even pick up the camera as is usually the case but we’re here now and guess what?

We’re waking up to a beautiful view which is just an atypical thing when in Pakistan, it’s just so beautiful all the time it does steven surprise me anymore it’s just like when you get into a place at night you know that in the morning, you’re gonna have a good old surprise so we’re rested we’re gonna grab some breakfast, gonna get some extra last-minute supplies from the local shop here and then we’re gonna head off on to the next adventure we’re heading up to the fairy meadows base camp which is about three and a half thousand meters in elevation so that should be pretty spectacular as well it’s also gonna be a lot colder so you notice will have on our warmer gear today as we’re leaving behind the sunny warm weather of the lower elevation areas that we’ve been in but yeah day four, it’s about to pick up now guys so you ready? Let’s go! Yeah, come around (How’d you get up there bro?).

There’s like a piece of wood that you can climb, it’s not very safe but you’ve gotta do it (perfect, let’s go)alright, I think I found the rickety piece of wood. Looks very stable and relatively safe, so should be a cakewalkVlogging while, going up rickety pieces of wood(I promise, there’s a chance it might break)Probably not the best of ideas but anything for the vlog right? (Anything for the vlog)You know what? This was the kind of stuff I would do before I was vlogging, if there was a rooftop I’m gonna try and find out how to get there the rooftop ninja Siya (Then vlogging just kinda happened after that)Oh see that’s the locals I was talking about, I saw this morning. And then they were perched upon the top of the rock there and I was flying the drone over them it’s quiet (they were crossing?) Yes, some were crossing, some had already crossed and they’re on that rock there, some of the kids (What were they crossing to? Like, what’s on that side?).

I don’t know bro, doesn’t look like much probably, you know… rock? Maybe they might have had their pee caves? Another funny story, I don’t know if I mentioned this but when we’re stuck for six hours behind that landslide, Mike and Lexi found this mystical pee cave. Okay, we’re finally on the move, it’s hailing, the weather doesn’t look great but we are on the move. Let’s see if we make it through, there was a big rush because we didn’t want the trucks to get in front of us, and some of us were peeing(I was- listen okay, you’re stuck for a long time) No, no I’m not saying, I’m saying legit, you’ve got to pee and there’s nothing we could do.

I know, there was actually- the guy led us down to a cave there’s a whole pee cave, you’re just peeing and number two, and he just took us by the hand and lead us to the cave, there was a lot of number two’s. There were mountains of it)They called it, where it was a hole in the rock, in the mountain, which was a perfect place to take a pee or number two and they said it was the best view that they’ve ever had while doing a one or two. (Yeah, a mountain of poop, he wasn’t lying. A mountain!).

Yes and there was quite literally a mountain of poop in that cave as well so very metaphorical, Siya is gonna try his way down, just like he came up. (I’m going to close my eyes, no I’m not)This time he’s gonna do it without vlogging (without vlogging and without hands)(Well that one’s a little rickety) Ooo and look at that one there. And there’s like jagged nails sticking out. Look at that balance, definitely the rooftop ninja.

I’m gonna put the camera down for this one. (You got it, boom! Look at that!) Landed it! Okay, we’re doing a quick walk to the shop, we got the whole crew now getting some essentials before we head up to the mountains, let’s go!Good morning, and assalamu alaikum.First of all, I would like to introduce myself. My name is Attanot Attar.. many people call me Attar, there is no R. My name is A T T Amy full name is Apoulabut my friends call me Atta and I’m your tour guide, I will be accompanying you till the Skardu Airport and Insha’Allah this time you will flyWe’re on the road again back into the van, headed for about an hour where we will switch to the 4×4 jeeps, those good old Jeeps, you guys remember those.

This is also where we say goodbye to the comfort of our beautiful beautiful CPIC Pak Tour van but a good one and then we’re gonna drive for another couple of hours up to Fairy Meadows which is the base camp for Nanga Parbat which is the ninth highest mountain in the world so it’s going to be high, it’s going to be snowcapped and it’s gonna be epic! Anusha (Yeah?) Anusha is ready(I’m ready) are you pumped? (very much so, yes)You’ve been to Fairy Meadows before? (I have, I loved it) It’s beautiful Fairy Meadow Nanga Parbat Western edge Himalayan Range Pakistan it’s the best place that I have been to so far the best place? (yeah, after Hunza)(Hunza is the best place, so the second-best place then)(Really beautiful) So what’s the first best place then? (Hunza)(I love it, yeah) and then Fairy Meadow’s is the second-best place in all of Pakistan? I’m told Skardu is better, but I haven’t been there yet so, yeah.

Both of those are on our itinerary, so we’re going to some of the best places in Pakistan and you’re gonna get to see them. First things first, was the smooth part of our journey. But after an hour or two, you know we had to make things a little bit more exciting. We’re coming to a stop now, and I see the beautiful epic 4×4 jeeps that I’m well familiar with from last year, looks like we might have a couple of new colors this time around, but it’s time to get on the jeeps! Let’s go! Okay so, 20 minutes into the drive the Jeep ahead of us has come to a bit of stop, so we’re having to do a bit of delicate maneuvering on the edge of a cliff which is always cool but they’re gonna get unstuckhopefully and then hopefully we’ll continue on but for now, the adventure continues.

And on we drove, traversing along with one of the world’s most dangerous roads or as I would put it one of the world’s most beautiful roads. Fairy Meadow Nanga Parbat Western edge Himalayan Range Pakistan Okay, so we’ve reached our lunchtime destination, just casually doing a three-point turn to park in the local parking lot. Wraps at the side of the mountain yeah and then grab some food and start our hike. Here we go! (Tell us what’s up?) I hope you enjoyed the ride on the most dangerous road in the world and now we are starting our three hours hike and it’s a steady uphill walk all the way to the Fairy Meadows, the well renowned most beautiful place in Pakistan with wonderful views of Nanga Parbat, so we are walking to those cabins and in ten minutes we’ll get there where some hot lunch is ready and after enjoying this hot lunch we will start our hike, before getting to the cabin- (and what will I do when you start your hike?).

Well, you can just say bye-bye and take off, you will be up there like a couple of hours before us, so make sure you ask them to prepare some tea for us when we arrive there (I will get your bed sorted) I know you are going to get the best room up there because first come first serve. Zee, are you taking a horse? Fairy Meadow Nanga Parbat Western edge Himalayan Range Pakistan Yeah (and then he gets the best room?)(Id love to hike but I don’t like it)I seemed so our hike began up toward the world-renowned Fairy Meadows but you have to wait for the next episode to see what happened along the way stay tuned towards the end before a little sneak peek of the next episode and don’t forget to like, comment subscribe and turn on those post notifications really helps us to show off Pakistan to an even wider audience, as always thank you so much for your love and your support. it’s 5:00 a.m.

Here at Fairy Meadow Nanga Parbat Western edge Himalayan Range Pakistan now and the sun’s about to rise which means it’s time to pack up some gear and go see what this special place has to offer. there’s nothing better than waking up with the Sun and knowing that it’s just gonna be you and the birds, you walk out the door and you get your first glance of the place, get the drone up and it’s time to go.

Fairy Meadows, named by German climbers and locally known as Joot, is a grassland near one of the base campsites of the Nanga Parbat, located in Diamer District, Gilgit-Baltistan, Pakistan.

At an altitude of about 3,300 meters (10,800 ft) above sea level, it serves as the launching point for trekkers summiting on the Rakhiot face of the Nanga Parbat. In 1995, the Government of Pakistan declared Fairy Meadows a National Park.

Fairy Meadows is approachable by a twelve-kilometer-long jeepable trek starting from Raikhot bridge on Karakoram Highway to the village Tato. Further from Tato, it takes about three to four hours hiking by a five-kilometer trek to Fairy Meadows. The grassland is located in the Raikhot valley, at one end of the Raikhot glacier which originates from the Nanga Parbat and feeds a stream that finally falls in the River Indus. Since 1992, locals have operated camping sites in the area.

Fairy Meadows remains a popular tourist destination in Gilgit-Baltistan from April to September. The weather is pleasant and windy during this season, with temperatures ranging from 2 °C to -10 °C. In winters, Fairy Meadows receives heavy snowfall and becomes almost inaccessible.