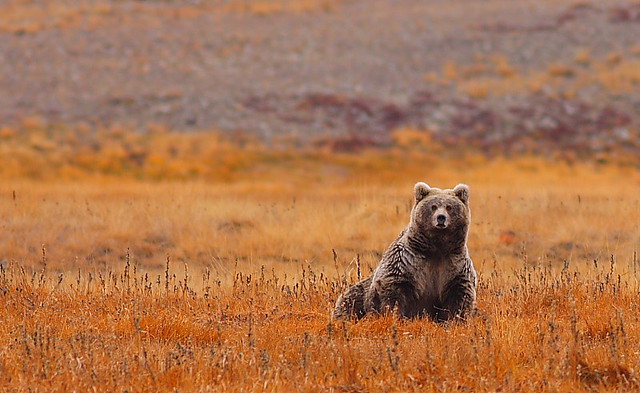 Deosai National Park Home of The Himalayan Brown Bears In the Western Himalayas cradled in the Karakoram mountains of northern Pakistan lyta plateau known as the land of giants the do Sai plateau and Gilgit-Baltistan is the second-highest plateau in the world the Himalayan brown bear is the most striking resident of the DSi and the national park was established here in 1993 to protect its survival there are thought to have been over10,000.

Himalayan brown bears at one time in northern Pakistan and Kashmir today the species is one of the most threatened in South Asia their numbers across the region have declined by half in the last 100 years they are now only found in small pockets in India Pakistan-Afghanistan China and Kazakhstanrepeated glaciations in hi Asiaprobably decimated a large part of the population and fragmented the rest over the centuries.

Bears have been hunted almost to extinction they’ve been killed for sport and for commercial purposes their body parts sold for use in traditional medicines in more recent times humans have encroached into the wild places where bears live these timid creatures avoid human settlements and every year across the region their numbers are declining today in Pakistan brown bears are found only in small numbers in a few remote northern areas but in the unique haven of the DSiPlateau guarded by the Sentinels of the Western Himalayas and the Karakoram mountains.

The Bears have found sanctuary the Bears of the DSi Plateau represent an ancient lineage found across the great Himalayan region hibernating in dens in the lower valleys and off through the winter they come up to feed on the rich grasses of the park in summer the Bears have thick coats which can be blonde to dark brown in color and a distinctive hump sits on its shoulders it’s slightly concave face is topped with large ears and a long snout its large canine teeth are capable of tearing meat but the Bears are largely vegetarian Home of The Himalayan Brown Bears and its back teeth are better suited for eating plants these bears are smaller than some of their genetic cousins even when fully grown males only weigh around 120 to 150kilograms a measure about one and a half to two meters in length.

The DSi bears have the lowest reproductive rates among brown bear populations anywhere in the world at a much trimmer 60 to 70 kilograms female bears don’t reach sexual maturity till around 8 years old and usually produce just a single cube cub that may stick to his mother for as long as five years and while he is with her she will not mate again.

Habitat which is very little nutritious food to offer is partly to blame for the low reproductive rates only 12% of the plane is regarded as a good feeding ground for the Bearsthey’re predominantly vegetarian eating grasses bulbs and roots which they’ll dig up with their long claws insects and fish are on the menu too today thanks to the efforts of conservation groups there are thought to be around forty-five of these remarkable bears living in the park in.

Deosai National Park Home of The Himalayan Brown Bears. Above the tree line and at an average height of 13,500 feet above sea level, the Deosai Plains are among the highest plateaus in the world. The Deosai Plains cover an area of almost 3,000 square kilometers. For just over half the year – between November and May – Deosai is snow-bound. In the summer months when the snow clears up, Deosai National Park is accessible from Skardu in the north and the Astore Valley in the west.

Visit in Deosai Home of The Himalayan Brown Bears:

Shear Lake is one of the most beautiful freshwater lakes in Gilgit Baltistan. The water drops from melted snow at Deosai are cupped into a beautiful lake. The lake has no out and in-stream for water. The crystal blue water forming an image of the surrounding lush green landscape with snow-covered mountains in the backdrop, and greenery with wildflowers in the foreground offer such a view in summers, that one is left amused for the rest his life.

As the name of this place indicates, this is the larger water stream flowing from the top of the icy mountains of Deosai and running towards the lower sides of the plain. Bara Pani is located between Deosai Top ( Ali Malik ) and Kala Pani. This is the best area for camping during the night stay. Here the environment is relatively warmer than other areas of Deosai. Tourist usually stays a night here before departing to Sheosar Lake.

While You left Bara Pani early morning for Sheosar Lake, your journey becomes more exciting with the greetings of Golden Mushi Mormuts. On the way just before reaching Seosar Lake, a relatively small stream of water flows.  This water stream is called Kala ( Black ) water because it looks nearly black from some distance. But as you reach near, the water is crystal clear and freezing.

Deosai Top is also known as Ali Malik Pass. There are other routes to Deosai, but the shortest route is through Ali Malik Mar pass. It is about 30km away from Skardu city. You will reach first at Deosai Top if you start your journey from Skardu. Here you can stay for a tea break. This place is relatively hilly.

Shantung Nala is a locality surrounded by snow-covered mountains and freshwater streams all the way. This water stream is the primary source of water of the Sadpara Lake in Skardu Gilgit Baltistan. When you reach this beautiful valley, the deafening silence of Deosai plains will be replaced by relaxing sounds of water flowing over rocks.

Deosai Plains make up one of the last frontiers of natural habitat for the Himalayan brown bear, a creature that once roamed the mountains freely. The park currently has between 20-28 Brown bears. This park was established to protect these endangered bears. Recently a research project has started by the Himalayan Wildlife Foundation (HWF) and the Northern Areas Forests, Parks, and Wildlife Department to secure the survival of the brown bear in the Deosai Plains and to monitor their population. The Deosai Plains are also home to the ibex, red fox, golden marmot, wolf, the Ladakh urial, the snow leopard, and a number of resident and migratory birds.