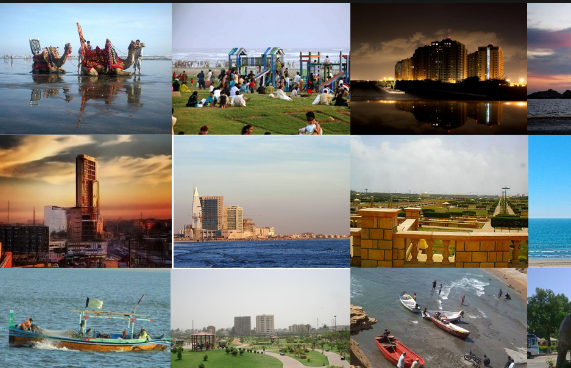 20 Most Visit Points in Karachi, Pakistan, which was once the prehistoric humble abode of Sindhi fishermen, is now a roaring urban economy that sustains the country with its large seaports. Always up and running, the streets of Karachi are cacophonous…
Read more in English

20 Most Visit Points in Karachi, Pakistan, which was once the prehistoric humble abode of Sindhi fishermen, is now a roaring urban economy that sustains the country with its large seaports. Always up and running, the streets of Karachi are a cacophony of colorful buses, impatient people, and the infectious energy of its daily hustle. But are there any attractions here that will make you forget all the chaos? Yes! And we have gathered 20 of them for you.

Churna Island and its water sports

If you love all things sea, then Churna Island, which is only a two-hour drive away from central Karachi, is a must-visit. Here is where you can swim, snorkel and scuba dive around the island’s reef and gaze at a multitude of sea creatures, from fish to snakes and turtles that inhabit its warm waters.

Art, architecture, and culture come to play at this 20th-century palace built by a Hindu Prince in 1925. Used today as an art gallery and museum, there are always thought-provoking exhibitions happening at this grand building surrounded by trees and Renaissance-style statues. The Rajasthani-style design of this structure is a sight to behold.

Being the founder of the nation, Quaid-e-Azam’s personal history and life wholly meshed with the history of the country itself. Visit this museum to embark on that quest or to admire the colonial building and the peaceful gardens around it.

Not only are winters a great time to visit Karachi because of its mild cold weather, but also because it’s the time when you can spot turtles at Turtle Beach. This beach is home to green sea turtles that come out to lay their eggs in the sands. It’s also a good picnic spot.

Dating back to 1865, the Frere Hall building recalls the time when Pakistan was a part of the Indian British colony. Surrounded by lush green gardens, today, the building serves as a library and an art gallery. Designed by Henry Saint Clair Wilkins, Frere Hall is located in the Saddar district, which is also home to many other picturesque colonial architecture.

If you like aircraft and all things aeronautic, then the Pakistan Air Force Museum is a must-visit. It is home to many aircraft, like planes and jets and radars and weaponry that have been used by the Pakistan Air Force throughout the years, especially during the 1965 war with India. Nearby, there are World War 1 and 2 scale models and some modern planes on the display as well. There are also food options in the main park and many places to relax in the gardens.

History buffs will go gaga upon visiting this ancient graveyard and UNESCO World Heritage Site that houses tombs of the ancestors of a local tribe. The intricate make of these graves is its most attention-grabbing feature with carvings and designs typical of its region, Sindh. The origins of this necropolis are estimated to range between the 15th and 18th centuries.

The pure white marble facade of the museum is not a sight to miss when in Karachi. The Mausoleum is a resting place for the country’s founder, or in Urdu Quaid, Mohammad Ali Jinnah. Its minimalist dome over a cube design was inspired by the Samanid Mausoleum in Uzbekistan.

The prehistoric city of Bhambore dates back to the 1st century BC and was constructed during the Scythe-Parthian era. Later, from the 8th to the 13th century, it was controlled by Muslims before being abandoned to date. The ruins and one of the earliest known mosques in the world, dating back to 727 AD, can still be found here.

The National Museum of Pakistan

This museum holds the most diverse range of art, from paintings to relics, sculptures, and models that depict all the facets of Pakistani culture. This museum consists of 11 galleries that showcase artifacts from the Indus Valley Civilization up to modern times. It also boasts a large collection of coins and many rare manuscripts of the Quran.

Also known locally as Gol, or round mosque, due to its large domed roof, Tooba Mosque is one of the city’s major attractions. The white marble dome is 236 feet in diameter and is balanced on a low surrounding wall with no center pillars to support it. The mosque can hold a congregation of up to 5,000 people.

Empress Market is a colorful but chaotic market that sells everything and anything. It’s a cool attraction to visit early in the morning to avoid rush hour. All imaginable groceries, live animals and pets, textiles, stationery, and many other things can be bought in the foyers and interiors of this colonial-era structure. The building is named after the then Empress of India, Queen Victoria.

This navel museum is among the city’s best attractions as it gives visitors a chance to see a real submarine, along with several aircraft and different artillery of the yesteryears that were used by the Pakistan Navy. There is also a six-gallery indoor museum that educates visitors through murals, relief sculptures, and dioramas.

Being among the few upscale open-air food establishments by the sea, Port Grand is a great place to try different cuisines that are offered by many of its restaurants and parlors, all the while viewing the sun as it sets into the ocean.

Set on 130 acres of land, this park is the largest in the city and is visited by over 10 million people each year. There is also a turtle pond and a rose garden found within its gates.

Do Darya is a local food lover’s paradise, built right along the seashore. There are numerous restaurants and cafes here to choose from, serving all types of fare.

For a quick getaway from the city center, head to this golf course and sports club to try your hand at shooting or give horseback riding a go. Other facilities include cricket, squash, tennis, snooker, and swimming.

Other than being a spectacular colonial-era building, the Hindu Gymkhana is a sporty social club. It also hosts NAPA, or the National Academy of Performing Arts, an art school that also showcases plays for wider audiences. Check it out, whether it’s for a cup of tea in a vintage atmosphere or to attend a mesmerizing drama performance 20 Most Visit Points in Karachi, Pakistan.

Cape Monze, or Mount, as it’s locally called, is a beach near Karachi surrounded by a hill where people can climb and get a great view of the horizon and the dark blue sea. It’s also home to endangered species like dolphins, whales, and turtles.

There are plenty of not-to-miss activities to engage in at the Defense Authority Marina Club, including sailing, boat riding, and dining. The club also has a sweet view of the sea and mangroves with birds like seagulls and herons flying by.